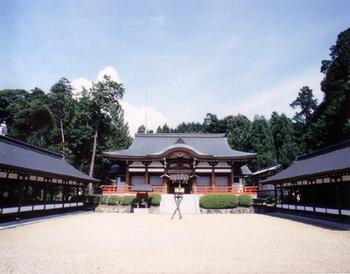 Before it was identified as Okadakuni Shrine in the Engishiki Jinmyocho shrine register in Meiji 11 (1878), it was named Tenjin Shrine. It was previously the guardian spirit of five villages in the former Kizu Town.

The former shrine building layout is one that has been passed down in the Saganaka-gun region, consisting of a stage in the center, and a hall of worship and parishioner’s office surrounding it. The shrine is an important and well preserved example of a collective deity shrine from the Muromachi period and is a registered cultural property within Kyoto Prefecture. The forest that backs the shrine is also a designated Prefecture Environmental Protection District.