In the south-east region of Kizugawa City and bordering Nara Prefecture lies the Odawara area. Starting in the late Heian period, many ascetic monks gathered in the valleys and summits of this hilly region and conducted retreats where they would devote their time to Buddhism.

Odawara was separated into two areas, with sub-temples and retreats centered around Zuigan-ji Temple in the east (now defunct), and Joruri-ji Temple centered in the west region called Nishi-Odawara. Though it is said Joruri-ji was built by the monk Gyoki at the behest of Emperor Shomu in the Nara period, temple records trace its history back to Eisho 2 (1047) and credit its construction to the monk Gimei from Toma, who enshrined Yakushi Nyorai at the temple. The temple’s name is associated with the master of Eastern Pure Land Buddhism, Yakushi Nyorai or Bhaisajyaguru. The Amida Hall, housing the Nine Sitting Statues of Amida, and the garden were constructed at the end of the Heian period, giving the temple its current layout. The garden at Joruri-ji is a representation of Gokuraku Jodo or the Western Pure Land. The pond in the middle is modeled after the “A” character in Sanskrit and is surrounded by the main hall housing the Nine Sitting Statues of Amida in the west, and the three-story pagoda enshrining Yakushi Nyorai in the east. The garden is an untouched, rare example of Jodo-style gardens and is backed by a natural environment, joining together to boast beautiful scenes through each season. It is designated as a Special Place of Scenic Beauty in Japan. 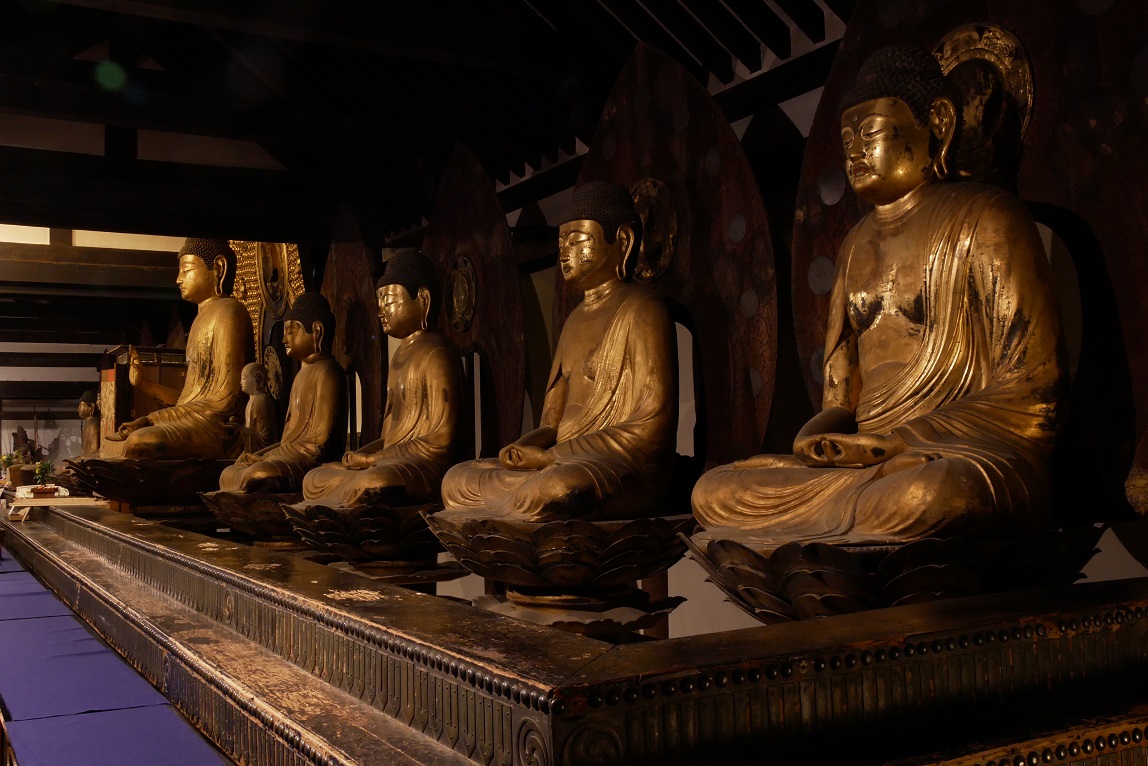 In response to public unrest following the end of the Heian period and to display the rise of Western Pure Land Buddhism, a horizontally long hall was built on the grounds of the temple and the Nine Sitting Statues were enshrined inside. The hall’s doors were outfitted to accommodate each statue and the original hinoki roof was replaced with tile roofing and a step canopy was also added. It is said that about 30 locations were built to enshrine a similar nine-statue formation in the Heian period, but Joruri-ji is now the sole location. Jikokuten and Zochoten, the two of four statues currently in the temple’s possession, can be seen stepping on an evil spirit with a comical expression. The body of Jikokuten is painted red and dons a flower headband on his head and a lion design on his abdomen area. Zochoten is colored similar to Jikokuten and holds a three-pronged sankosho and geki polearm. The Three-story Pagoda was moved from its previous location to its current location just before the start of the Kamakura period to prevent it from being burned down in war fires. Located east of the garden, the pagoda completes the Jodo Garden layout by placing Yakushi Nyorai in the east and Amida in the west of the garden center. A sitting wooden statue of Yakushi Nyorai (Important Cultural Property) is enshrined on the inside of the pagoda and its walls contain depictions of the Eight Patriarchs of the Shingon sect and the Sixteen Arhats. The pagoda ceiling and pillar are also decorated with vibrant colors.

The origins of the temple’s name is associated closely with the Yakushi Nyorai statue as it was the initial principal object of worship. After the construction of the Amida Hall, the temple’s focus turned to the worship of Amida Nyorai. The Sitting Statue of Yakushi Nyorai currently sits in the Three-story Pagoda.

Based on temple records, the statue of Kissho Tennyo was enshrined in the main hall in Kenryaku 2 (1212) and it is thought to have been created around this time as well. Its color is well preserved and it maintains an air of elegance and exoticness. Kissho Tennyo is known as a goddess of fortune and beauty and is viewable during New Year’s, and certain days during the spring and fall seasons.