Gansen-ji Temple is an ancient temple located in the south-eastern region of Kizugawa City. Said to be established at the behest of Emperor Shomu, it is home to numerous cultural properties from many historical periods such as the temple’s principal idol, a sitting statue of Amida Nyorai from the Heian period, a 13-story pagoda and gorin pagoda from the Kamakura period, and a three-story pagoda from the Muromachi period. Similar to Joruri-ji Temple, Gansen-ji is heavily influenced by Kofuku-ji Temple in Nara.

The temple’s location in the valley of a mountainous region blesses it with an abundance of broadleaf trees that flourish at the start of summer and change color during autumn to match with the recently repaired three-story pagoda. Its compact grounds provide additional depth and is known for the ajisai (hydrangea) planted throughout that blossom beautifully during the summer. 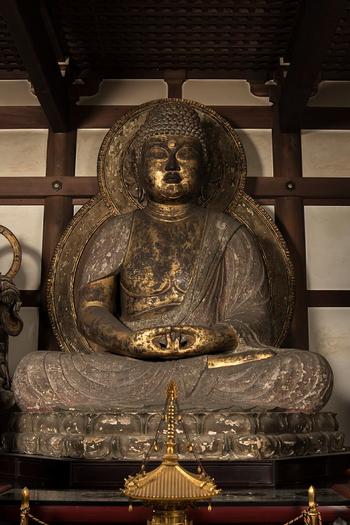 The temple’s principal idol, a sitting statue of Amida Nyorai, measures 2.4m tall and is carved out of a single piece of kaya wood. The inside of the statue is decorated with numerous sutra inscriptions and other information, alluding to the importance of early Heian carvings from the Jogan era. It is considered a transitional statue in the realm of Japanese artistic expression and a standard piece in Japanese art history. It retains some of its red color on its clothes, signifying its antiquity. The statue of Fugen Bosatsu is enshrined in a cabinet in the main hall. Made in the Heian period, the charming statue stands at a short 39.5cm, and the white elephant underneath was affixed at a later date. A depiction of the Hokke Mandala can be found on the back panel of the cabinet, and a signature denoting repair on Eisho 16 (1519) is inscribed on the bottom. 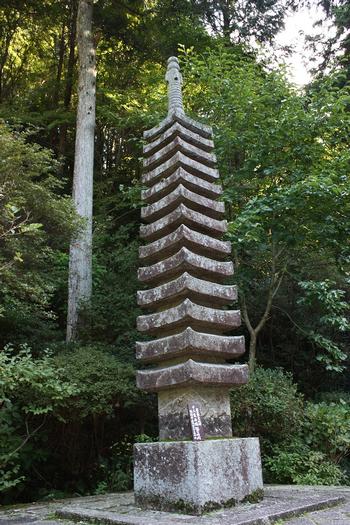 A 13-story stone pagoda standing at 6.2m is also featured within the temple grounds. From the hewn stone base to the sorin top, the stone pagoda is rare in its completely preserved state, thus earning a designation as an important cultural property. Pass through the main gates of Gansen-ji Temple and you’ll see the red Three-story Pagoda standing atop a hill. From an inscription, it is thought that the temple was built around Kakitsu 2 (1442). The first floor of the wood pagoda is absent of shinbashira and shitenbashira pillars, and an altar backed by two raigobashira pillars is placed in the center, conveying a Muromachi period style. Paintings decorating the walls of the first floor were recently restored, as were the pagoda doors paintings.

From JR Kamo Station, board the Tono Line bus (当尾線) and disembark at Gansen-ji Temple (岩船寺)

From JR or Kintetsu Nara station, board the express bus to Joruri-ji Temple (急行バス 国宝浄瑠璃寺), disembark at Joruri-ji and transfer to Tono Line bus headed to Kamo Station. Disembark at Gansen-ji Temple (岩船寺).