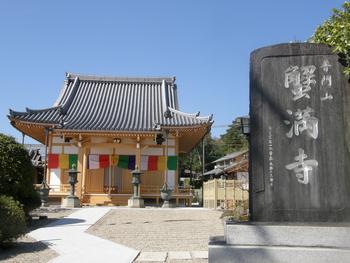 Kaniman-ji is a late-Hakuho period temple famous for its historical relation to the story Kani no Ongaeshi contained in the Konjaku Monogatari, a collection of tales written during the Heian period.

The temple’s principal image, a sitting bronze statue of Shaka Nyorai, is considered a masterpiece in the world of Buddhist art in Japan, comparable to the Yakushi statue enshrined at Nara’s Yakushi-ji Temple. The history and lineage of this grand statue is unclear and has long been the center of a debate regarding its mysterious past. Following an archaeological survey in 2005, it was confirmed to be a work dating back to the founding of the Hakuho period.