Kaijusen-ji, a mountainside temple overlooking Mikanohara, was said to be built in Tenpyo 7 (735) by High Priest Roben of Todai-ji Temple at the behest of Emperor Shomu. The origins of Kaijusen-ji tell of an 11-Faced Kannon figure that sprung from the earth and became their principle image of worship, and of the temple’s original name, Kannon-ji. The temple was later renamed Kaijusen-ji by the monk Jokei who restored the temple during the Kamakura period.

Next to the main hall is the soaring Five-Story Pagoda. Painted in red, this magnificent piece of the Kamakura period set in the mountain range is a designated National Treasure of Japan. Other artifacts in the temple’s possession, such as the 11-Faced Kannon statue, Monju-do Hall, Colored Hokke Manadala Diagram on Silk, and the Kaijusen-ji Temple Documents are designated important cultural properties.

Kaijusen-ji’s Five-Story Pagoda was erected by Jokei’s successor High Monk Jishin Shonin in the year Kenpo 2 (1214). While small for a pagoda, the disassembly and repair efforts in 1962 restored the skirt-story (a decorative roof designed to give the illusion of more floors) on the first level, making it and Horyu-ji Temple’s Five-Story Pagoda in Nara the only two to have that structural distinction. The pagoda’s doors are opened every year towards the end of October for public viewing.

The temple possesses two 11-Faced Kannon statues that have been handed down throughout its history. Out of the two, the temple’s principle statue is a 167.7cm tall, single-wood kaya tree statue. Due to chipping, the statue’s old coat is mostly non-existent, while its current coat is the product of restorative coloring done after its creation.

The second statue is a nenji-butsu statuette (decorative Buddhist statue) that belonged to Jokei himself. Standing at a mere 45.5cm, the miniature 11-Faced Kannon cedar statue is colorless and adorned with detailed carvings. 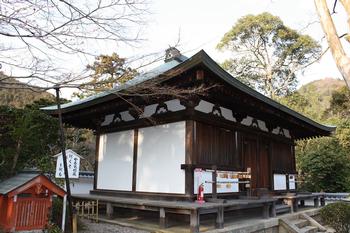 The Monju-do Hall is a small (5.43 x 3.62m), hip-roofed building located north of the main hall. The original hinoki bark roof tiles have been replaced with the current sheet copper tile roofing. The hall was named after the Monju Bosatsu on Elephant statue enshrined inside, and it’s said that its construction can be traced back to prayers requesting a sutra scroll depository during a service commemorating the 12th anniversary of Jokei’s passing.