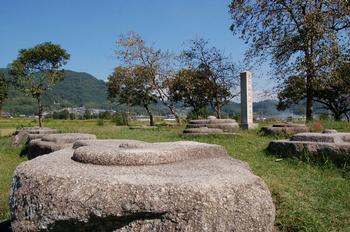 Approximately 1300 years ago, the Mikanohara area in Kamo was the location of the Japanese capital and Kunikyu Palace.

The area is home to many ancient relics and is thought to be an important staging area in Japanese history.

Veiled in mystery, there is still much to be discovered at the Kunikyu Palace ruins. This page contains the extent of what is known about it.

In October of the year Tempyo 12 (740), Emperor Shomu left the capital Heijo to make imperial visits to Iga, Ise, Mino, and Omi. Upon his return in December, he announced the movement of the capital to Kunikyu (located in an area currently known as the Kamo Town region of Kizugawa City).

After only four years as the capital, Emperor Shomu moved it again to Naniwa (Osaka) in 744, and then once more back to Heijo (Nara) in just over a years time in 745.

In the short four years Kunikyu was the capital of Japan, a number of important events happened, such as the issuing of imperial edicts ordering the construction of provincial temples, nunneries (741), and the Nara Daibutsu (743). These events and more solidify Kunikyu's status as an important location in Japanese history.

Kunikyu was designated as an important historical site by the government in August 1957 and in February 2007, it was given the official name "Kunikyu Ruins (Yamashiro Kokubun-ji Ruins)" and given protection as a historical site.

The ruins contains the remnants of the Daigokuden building foundation stone and the Seven-story Pagoda that was to be constructed. From late summer through autumn, buckwheat flowers, red spider lilies, and cosmos flowers bloom, creating a pleasant, floral scene. 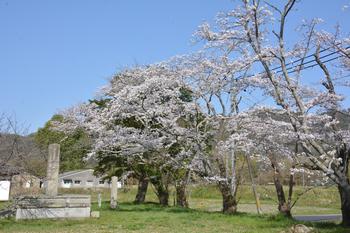 Community bus directions: Board the Okubata, Zezu, or Nishi Line from JR Kamo Station and get off at Kunikyu-seki bus stop.