What is the Daibutsu Railway?

The Daibutsu Railway was an 8.8km long, temporary rail system built 1.1km north of the current Nara Station. It connected Kamo Station and Daibutsu Station during a time when Kansei Railway, one of the five big private railway companies from the Meiji era, sought to extend service from Nagoya to Osaka.

Service to and from Daibutsu Station commenced in April 29, 1898. "The red, English-made steam train was lively with Nagoya and Ise citizens making a pilgrimage to the Daibutsu in Nara," reported one paper about the new train.

The train consisted of 10 passenger rooms which were described as being able to hold five people at a time and the seats were made out of wooden boards. As rooms were not connected, moving rooms required the rider to exit their own first then enter through the door of another. Kamo residents called the cars "match boxes."

The railway enjoyed a bout of popularity, but faced a few challenges. Despite being a new, English-made steam train, it had trouble climbing the steep Mt. Kurokami slope. One rider recalled that "the train runs quite slowly, and while a two-train formation seems to work well, singular formations fail to make the climb."

The times it couldn't make it up Mt. Kurokami, passengers and residents from Horen Village helped push it up.

It is also said that the train consumed large amounts of coal as fuel.

Tracks from the Daibutsu Railway can no longer be seen, but bridge trestles and tunnels used by the railway are still as they were built over 100 years ago. The antique architecture melts into the nature of the surrounding mountain villages and is popular amongst train fans and hikers.

Below are some locations and buildings left intact from the days of the Daibutsu Railway. The lamp shed is a brick-laid building located on the west side of JR Kamo Station that was constructed in October 1897 and has been there since the opening of Kamo Station.

Incorporating Dutch-style brick laying, the roof of the shed is gabled, a rarity for this type of building. It was used primarily to store oil for use in passenger car lamps and train headlights. 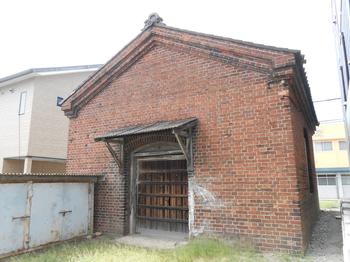 This train had run along the Daibutsu Railway line in 1972 and was subsequently moved to this location.

The locomotive is lovingly nicknamed "The Running Madam." 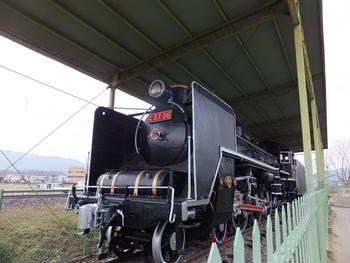 This stone abutment was created to ease the elevation difference on the line. Currently, the JR Yamatoji Line runs atop it.

Construction of the structure occurred concurrently with that of a connection line tying the Daibutsu line to Kizu. 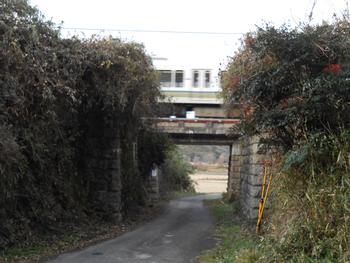 The strength of this structure is apparent in looking at the way it is constructed and it could still hold up a train if rail was laid. 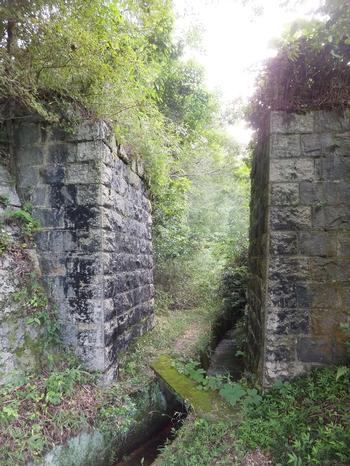 This brick and granite tunnel was made during the construction of the embankment for the Daibutsu Railway with consideration for agricultural water flow.

The archway is brick laid length-wise and the tunnel itself incorporates an English style of laying that is indicative of the high level of craftsmanship involved.

The tunnel is well preserved and is a representative work of the former Daibutsu Railway. 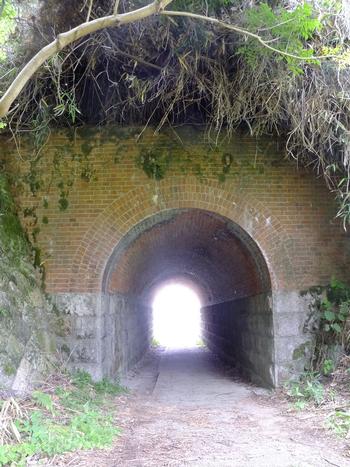 This bridge was made with a mixture of granite and brick, which were stacked in an English-style, alternating long and short bricks.

It is a definitive architectural piece in the railway's history and is still in use today. 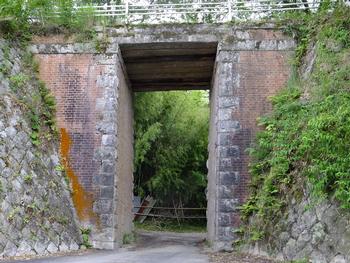 Walk down to the farmland in this area and you'll discover what's left of the Matsutanigawa Tunnel.

In place of the railway that used to be on top of the tunnel, prefecture road 44 runs atop it. 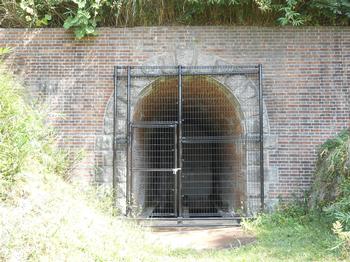 The Shikagawa Tunnel, like the Kajigaya Tunnel, was made to accommodate agricultural water flow. Although quite thin, it is beautifully constructed.

Prefecture road 44 currently runs atop it in place of the former rail tracks. The Kurokamiyama Tunnel was still standing after the closing of the Daibutsu Railway. However, in an effort to widen the road in 1966, the tunnel was demolished.

A replica of the Kansei Railway symbol that decorated the entrance of the old tunnel is displayed as part of monument near Matsutanigawa Tunnel. 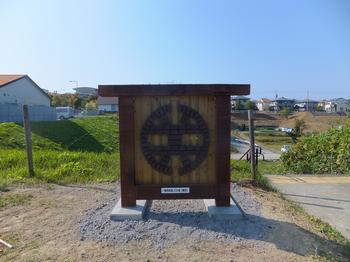 The former Daibutsu Station is now the site of a park commemorating its existence.

At the park is a locomotive driving wheel monument and a plaque describing the short history of the Kansei Railway Daibutsu Station. In 1895, the Kansei Railway serviced areas through Kusatsu and Nagoya, and planned to expand service from Tsuge to Osaka. Two years later in November of 1897, Kamo became the new addition to the company's serviced areas.

From Kamo station the railway passed through Umedani and Kurokamiyama Tunnel, stopping finally at Daibutsu Station, whose opening followed Kamo's in April, 1898.

Both residents and tourists became familiar with Daibutsu Station, often disembarking there to visit Todai-ji Temple, located a short walk away from the station.

Service to Nara Station started the following year in May 1899.

Daibutsu Station operated for nine years, closing in August of 1907 after a decision to divert the rail through Kizu Station.

Until 1966, remnants of many tunnels used in the Daibutsu Railway were left over but were subesequently demolished in lieu of modern development. Most of them can no longer be seen. 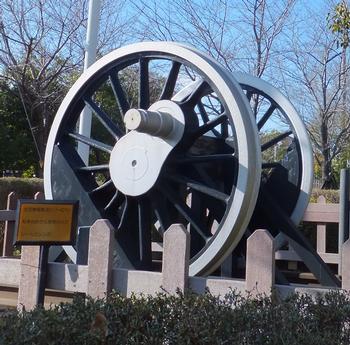 The Sahogawa Steel Bridge Ruins were found in 2007 at the bottom of the Sahogawa underneath Shimochokei Bridge. Made of brick, the foundation was the base for a bridge used by the Daibutsu Railway line.